You are here: Home / Archives for Josh Stinson 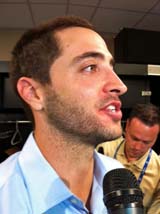 Roenicke was trying to win with a bullpen by committee.  It turned out to be too much to ask as the Brewers dropped their season finale 7-6 to the San Diego Padres on Wednesday night at Miller Park.

With 4 RBI’s from 1st baseman Travis Ishikawa, the Brewers jumped out to a
6-0 lead, but the Padres answered with 7-runs the rest of the way to pull out the 7-6 win.

The Brewers still managed to take 2 of 3 from the Padres in the series to finish 83-79.

Rookie starter Josh Stinson kept the Padres off the scoreboard for the 1st three innings before surrendering a solo home run in the 4th off the bat of Chris Denorfia. END_OF_DOCUMENT_TOKEN_TO_BE_REPLACED

Martin Maldonado clubbed his 1st career grand slam on Tuesday night, leading the Milwaukee Brewers to a 4-3 win over the San Diego Padres.

Maldonado clubbed his 8th home run of the season off of Anthony Bass in the 3rd inning and is one of 10 rookies to contribute to the Brewers win at Miller Park.  Maldonado had been in a 1 for 16 slump prior to his home run.

Jim Henderson (1-2) pitched a perfect seventh inning for his first major league victory.  Henderson had toiled in the minors for 10 seasons, pitching in 313 minor league games before getting his chance with the Brewers.

John Axford worked the ninth for his 35th save, getting Logan Forsythe to ground out with a runner on third to end it.

Josh Stinson will pitch the season finale tonight for the Brewers.  He replaces Yovani Gallardo, who is a healthy scratch for tonight’s game.

The Milwaukee Brewers have recalled RHP Wily Peralta, RHP Tyler Thornburg and OF Logan Schafer from Triple-A Nashville and recalled RHP Josh Stinson from Double-A Huntsville.  All four players will join the Brewers tonight at Miami.

Peralta, who went 7-11 with a 4.66 ERA in 28 starts with Nashville, will start Wednesday’s game at Miami.  He made his Major League debut in a relief appearance with the Brewers on April 22 vs. Colorado.  Thornburg is in his third stint with Milwaukee.  Schafer hit .278 with 11 HR, 40 RBI and 16 stolen bases in 124 games with Nashville.

Stinson went 11-0 with a 3.16 ERA in 29 games (24 starts) with Huntsville.  His 11 wins tied for the most among Brewers minor leaguers and was tied for second in the Southern League, while his 3.16 ERA ranked third in the league.