You are here: Home / Archives for Tyler Thornburg

The Milwaukee Brewers have reached a deal with free agent right-handed reliever Neftali Feliz on Thursday.  The one-year deal is worth a reported $5.35 million and includes additional incentives.

Feliz had Tommy John surgery back in 2012 and missed time late last season with arm fatigue.

The Brewers had been searching for late-inning relief help after trading closer Tyler Thornburg to Boston at the Winter Meetings in December.  Thornburg took over the closer duties when Jeremy Jeffress was traded to Texas on August 1st and lefty Will Smith was traded to San Francisco.

Feliz compiled 40 saves with the Texas Rangers in 2010 at the age of 22 and captured American League Rookie of the Year honors.

The Milwaukee Brewers closed out their 2016 season with a 6-4, 10-inning victory over the Colorado Rockies at Coors Field in Denver on Sunday.

Catcher Andrew Susac clubbed a two-run home run with two outs in the top of the tenth inning to give the Brewers the victory.  Prior to his home run, Susac struck out three times and grounded out.

The Brewers had a chance to win the game in regulation, taking a 4-3 lead into the bottom of the ninth, but closer Tyler Thornburg blew a save for a second straight day and the third time in the final week of the season.  Jordan Patterson’s rbi single in the ninth spoiled Thornburg’s final game of the season.

The Brewers were trailing 3-2 in the eighth when Domingo Santana clubbed a two-run homer to put his team in front 4-3.

Both Chris Carter of the Brewers and Nolan Arenado of the Rockies failed to homer in their final game, which leaves them tied for the National League home run title with 41 each.

Santana’s strikeout in the fifth inning gave the Brewers the Major League record for strikeouts in a season with 1,536.

The Brewers finished with 73 wins on the season, five more than a year ago.

The Chicago Cubs started the day with a magic number of one to clinch their first National League Central Division title since 2008.  They were ready to celebrate with Champaign on ice, but the Milwaukee Brewers weren’t about to lay down.

The Brewers knocked off the Cubs 5-4 in the first game of their four-game series at Wrigley Field and put the Cubs party on hold.

It was the first win at Wrigley Field for the Brewers over the Cubs this season.  Jimmy Nelson allowed three-runs in six innings, his best performance in several weeks.  He improved to 8-14 on the season and picked up his first career victory against the Cubs.  Closer Tyler Thornburg came on to get the final four outs to post his 10th save of the season.

The Cubs would eventually clinch the Central Division title when the St. Louis Cardinals fell to the San Francisco Giants 6-2 out west.  Their celebration will come after today’s second game of the series between the Brewers and Cubs.

Chase Anderson (8-11) pitches this afternoon for the Brewers.  John Lackey (9-8) goes for the Cubs. 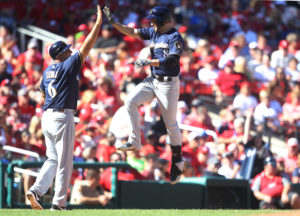 The Milwaukee Brewers batted around and scored four runs in the eighth inning, setting the stage for an eventual 7-4 win at PNC Park.

Orlando Arcia, Manny Pina and Keon Broxton all drove in runs against the Pirates bullpen.  Arcia finished the game a home run shy of the cycle.

The Pirates got two runs back in the bottom of the eighth, but the Brewers would score one more time in the ninth to close out the scoring.

Tyler Thornburg closed out the ninth, retiring all three hitters to collect his 8th save of the season.

The Cardinals only run came on a Yadier Molina solo home run in the fourth. END_OF_DOCUMENT_TOKEN_TO_BE_REPLACED 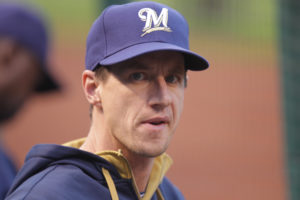 Chase Anderson won for the third time in his last four outings, improving to 7-10 on the season.  He worked 5 1/3 innings before giving way to the bullpen. END_OF_DOCUMENT_TOKEN_TO_BE_REPLACED 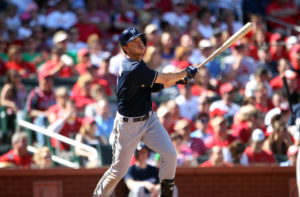 Corey Knebel set the Padres down in the eighth and Tyler Thornburg worked a 1-2-3 ninth inning to record his third save of the season. END_OF_DOCUMENT_TOKEN_TO_BE_REPLACED

Atlanta’s Julio Teheran struck out 12 Brewers on Tuesday night, but Scooter Gennett made a couple of key plays to lead Milwaukee to victory.

Teheran and Brewers starter Jimmy Nelson were locked in a battle and eventually removed with the score tied 1-1.

Gennett held the tag on Mallex Smith on a stolen base attempt.  A replay challenge showed that Smith lost contact with the base and Gennett’s effort forced an out call.

In the 8th inning, with two outs, Jonathan Villar worked a walk, stole second and scored on Gennett’s single to right to give the Brewers the lead and eventually the game.

Tyler Thornburg pitched a scoreless 8th and Jeremy Jeffress came on to nail down his 12th save.

Ryan Braun gave the Brewers their first run, a home run to center in the fourth.

The Brewers ended their three-game losing streak and the Braves fell to two-and-18 at home this season, the worst mark in the majors.

Game two of the series is tonight.