You are here: Home / Archives for Jim Henderson

The Milwaukee Brewers announced their minor league coaching staffs on Thursday and Appleton native Matt Erickson will return to manage the Class A Wisconsin Timber Rattlers for a ninth straight season.

Erickson, who was the Timber Rattlers hitting coach in 2009 and 2010, has been with the Rattlers since the team’s affiliation with the Brewers began.  The Timber Rattlers have been to the Midwest League playoffs three times under Erickson’s direction.  Wisconsin won the 2012 Midwest League Championship with Erickson at the helm.  He is the longest-serving manager in the history of Appleton Professional Baseball.  His regular season record with the Rattlers is 536-574 (.483).

Erickson will be joined by former Brewers relief pitcher Jim Henderson, who pitched for the Timber Rattlers in 2009.  He was named the Timber Rattlers pitching coach for the 2019 season.  Dave Joppie, who managed the Kane County Cougars in 2004 and 2005, enters his third season in the Brewers organization as the hitting coach of the Rattlers.

Henderson made his MLB debut on July 26, 2012 against the Washington Nationals, the organization with which he started his pro career.  Henderson appeared in 111 games over three seasons with the Brewers and collected 31 saves.  He pitched in 44 games for the New York Mets in 2016, his final season in the majors.  This will be his first full-season as a coach in the Brewers minor league system.

AUDIO: Matt Erickson is glad to be back for a 9th season with the Timber Rattlers :22 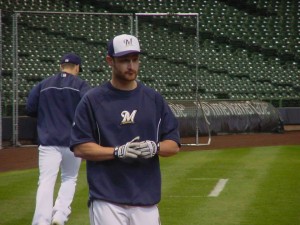 The Brewers also sent right-handed reliever Rob Wooten to Colorado Springs, leaving the Brewers with 13 pitchers in camp.  Among the 13 is Jim Henderson, who is expected to start the season either on the END_OF_DOCUMENT_TOKEN_TO_BE_REPLACED

Reliever Jim Henderson pitched in a game for the first time since May 2 of last season, working a hitless inning.

Manager Ron Roenicke was pleased with Henderson’s work.  Roenicke said, “He threw some sliders down, which I liked.  He missed with them down but I still liked it.  The ball looked like it came out free.”

The Brewers play their Cactus League opener in Tempe, Arizona this afternoon.  Kyle Lohse will get the start for the Brewers.  Barring an upset, Lohse is expected to be the Brewers starting pitcher on opening day.

AUDIO: Henderson on his first outing :11

AUDIO: Henderson said the outing was a positive 1st step :13

It’s the second tour with the Brewers for Jeffress, who was the teams first-round draft pick in 2006.  He’s been held back by control issues on the mound and drug-related suspensions.  He pitched in 10 games for the Brewers in 2010, but was traded to Kansas City in the Zach Greinke deal.  END_OF_DOCUMENT_TOKEN_TO_BE_REPLACED

After allowing five runs, four hits and a walk in last night’s 8-3 loss to the Cincinnati Reds, the Milwaukee Brewers have placed relief pitcher Jim Henderson on the 15-day disabled list because of right shoulder inflammation.  Outfielder Caleb Gindl has been recalled from Triple A Nashville to take his place on the roster.

Henderson struggled with his velocity during spring training and lost his closer’s job to Francisco Rodriguez right out of the gate this season.  Henderson (2-1) has pitched 11 1/3 innings, allowing 10 runs (9 earned) and 14 hits, including three home runs.  His ERA stands at 7.15.

Gindl was hitting .284 with two home runs and six RBI’s over 25 games at Nashville.

Jim Henderson struck out Matt Adams with two runners on and two out in the 9th inning last night to pitch the Milwaukee Brewers to a 6-4 win over the St. Louis Cardinals in the home finale at Miller Park last night.

It was Adams who clubbed a 2-run homer off of Henderson in the ninth inning on Friday to snap a 4-4 tie and give the Cardinals a win in 10-innings.

The Cardinals had learned earlier in the day that they clinched at least a spot in the post-season playoffs.  They hold a 2-game lead on both Cincinnati and Pittsburgh atop the NL Central with a week left in the regular season.

Pinch-hitter Travis Snider homered in the 9th inning to lift Pittsburgh to a 4-3 win over the Milwaukee Brewers on Tuesday night, clinching the Pirates’ first non-losing record in 21 seasons.

Snider drove a 2-2 pitch from Jim Henderson over the wall in center for his second pinch hit homer of the season.  It was victory number 81 for Pittsburgh, insuring the Pirates will not finish with a losing record for the first time since 1992 when they finished 96-66.

The Pirates’ led in the NL Central is now 2-games over the St. Louis Cardinals, who fell to the Cincinnati Reds 1-0.

Yovani Gallardo didn’t have his good stuff but did make it through 7-innings, allowing 2 earned runs on 5 hits.  He was not involved in the decision.

Khris Davis clubbed a pair of two-run homers in consecutive at-bats for the first multi-homer game of his career, leading the Milwaukee Brewers to a 6-4 win over the Cincinnati Reds in the series opener on Friday night.

Davis has 8 home runs this season with all 8 coming in the 23 games since he returned to Milwaukee from the minors, his third stint with the team.

Scooter Gennett also homered for the Brewers, who won at Great American Ballpark for just the second time in seven games this season.

Rob Wooten earned the win in relief and Jim Henderson notched his 23rd save.

Wily Peralta pitches game 2 of the series for the Brewers tonight.

The Milwaukee Brewers struggled to score runs in the first two games of the series, but a big 6th inning on Sunday brought them from behind in a 8-5 win over the Washington Nationals at Miller Park on Sunday.

Jeff Bianchi lofted a single that dropped just behind Washington’s drawn-in infield, breaking a tie and capping a 5-run sixth inning as the Brewers pulled out the win.  Bianchi drove in a season high 3-runs in the victory.

John Axford gave up a home run, but earned the win in relief.  Jim Henderson added his 15th save.

The Brewers open a 4-game series in San Francisco against the Giants tonight.