You are here: Home / Archives for Zach Duke 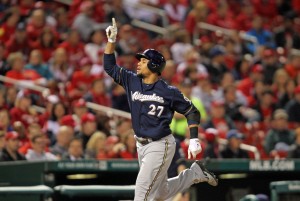 Making just his second start in place of the injured Matt Garza, 29-year-old right hander Mike Fiers blanked the Chicago Cubs on 3-hits while striking out a career high 14 batters in six innings as the Milwaukee Brewers beat the Cubs 6-2.  The Brewers salvaged a split of the four game series and remain 2-games in front of the Cardinals and 2 1/2-games in front of the Pirates atop the NL Central Division.

Fiers (2-1) struck out the side in three different innings and became the first Brewers pitcher to record double-digit strikeouts since Sept. 30, 2012.

The 14 strikeouts tied Yovani Gallardo and Moose Haas for the second-most strikeouts in franchise history, behind Ben Sheets’ 18.

It’s the second tour with the Brewers for Jeffress, who was the teams first-round draft pick in 2006.  He’s been held back by control issues on the mound and drug-related suspensions.  He pitched in 10 games for the Brewers in 2010, but was traded to Kansas City in the Zach Greinke deal.  END_OF_DOCUMENT_TOKEN_TO_BE_REPLACED 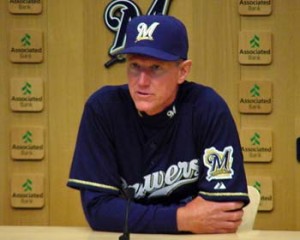 Among the players that made the 25-man roster is Rule 5 draft pick Wei-Chung Wang.  Wang made the jump from rookie ball and will be used by the Brewers in long relief. END_OF_DOCUMENT_TOKEN_TO_BE_REPLACED

The Milwaukee Brewers have signed free agent left-handed pitcher Zach Duke to a minor league contract with an invitation to spring training.

Duke was drafted by the Pittsburgh Pirates in the 20th round of the 2001 amateur draft.  He spent six years in Pittsburgh and also had stints with Arizona, Washington and Cincinnati.