You are here: Home / Archives for Environment / Conservation

The numbers are in, for the opening weekend of Wisconsin’s gun deer hunt. “Things started out a little slower than we were hoping that they would, but still we had over 90,000 deer registered, with a little over half of those, 47,000 being antlered bucks,” said Kevin Wallenfang with the Department of Natural Resources.

The nine-day gun deer season opened Saturday and runs through Sunday. “I would just encourage people, you know we’re only talking about the first two days of the season, and there’s still lots of time out there and lots of deer out there to pursue, so get on out there and enjoy it,” Wallenfang said.

The Wisconsin Department of Natural Resources is investigating four different hunting gun-related incidents that happened over the opening weekend of deer season, including one that is being treated as a criminal investigation. Law enforcement are looking for information after a man was shot Sunday morning in the Washburn County Town of Minong.

The WI DNR is seeking the public’s help in the case of an adult male shot while deer hunting in Washburn County on Sunday, Nov. 24, of the opening weekend of the annual gun deer season, which so far has four hunting incidents.https://t.co/hiHSNzAM8t

Two hunters shot themselves in the left foot with their own weapons, one in Oneida County and one in Marantion County. In Fond Du Lac County, wardens report that a hunter fired at a running deer and instead struck a 19-year-old woman in the hand.

This early blast of winter weather will be hanging around for a number of days.

National Weather Service Meteorologist Taylor Patterson says you’re not mistaken if this seems out of the ordinary.

“Yes, yes, this is quite unusual for early November. As far as temperature wise, well below normal, and then for the snow, both Milwaukee and Madison, we’ve had records set for consecutive number of days with snow on the ground.”

Patterson says we can expect cold temperatures and more snow.

“Expect Tuesday morning to be really cold with temperatures in the single digits. For the highs on Tuesday, we’re expecting highs to be in the teens or low twenties. As we get into Wednesday, Wednesday night, we could see another round of precipitation and some snow.”

Expect sunshine and temperatures near freezing on Thursday.

With archery deer season underway and rifle season not far off, Wisconsin DNR officials are reminding hunters to properly dispose of their carcasses to prevent the spread of Chronic Wasting Disease.

Daniel Kroll is a Waste Management Specialist in the DRN’s Green Bay Service Center, he says they’ve put together a comprehensive website detailing municipal landfills equipped to handle what’s left of the deer.

“We don’t want the deer on the landscape,” said Kroll. “[CWD] can be spread through contact with deer and it also can be incorporated into the soil where it’s been known to survive for many years.”

Kroll says as of now there are just over a dozen landfills that will take the carcass. Hunters can use the site to find basic information such as directions to the site, hours of operation, and any cost that may be associated with the drop-off.

Other city and county facilities are also accepting carcasses, as are some private businesses.

Additionally, hunters can use the site to find the nearest drop CWD testing kiosk.

In Portage County residents can take their carcasses to the Solid Waste Transfer Facility where a DNR dumpster will be stationed from November 1st through December 31st. The Marathon County Landfill will also accept remains for a fee outside of that window.

They found the virus while searching for the cause of Wisconsin River Eagle Syndrome near the Lower Wisconsin River. The newly identified bald eagle hepacivirus, or BeHV, may contribute to the fatal disease, which causes the birds to stumble and have seizures.

But BeHV was also found in eagles without symptoms of the syndrome, making a direct link between virus and disease difficult to confirm.

The virus and the syndrome don’t appear to threaten the resurgence of the bald eagle, which was removed from the endangered species list in 2007.

Governor Tony Evers has announced creation of a climate change task force for Wisconsin. Climate change as an issue was largely ignored by the administration of Evers’ Republican predecessor, Scott Walker.

Evers signed an executive order on Thursday at Milwaukee’s Urban Ecology Center. He said it’s “time to deliver on the promise to our kids that we’re leaving them a better life and world than the one we inherited.”

Lieutenant Governor Mandela Barnes will lead the task force. The task force will report their findings and policy recommendations to Evers by August 2020. 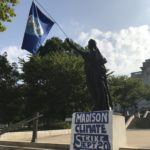 Young people are taking their climate change fears to the streets on Friday. Around the world, across the U.S. and in Wisconsin, they’ll be out for the Global Youth Strike for Climate. Sophie Guthier is executive director of Wisconsin’s Youth Climate Action Team.

Guthier says young people hold both political parties responsible for the failure to address the climate crisis, and after rallying at Madison Gas & Electric, they plan to occupy the Capitol.

“We’re already seeing some of the impacts of climate change here in Wisconsin, with the historic flooding that we saw last summer, and even the flooding that we’re continuing to experience here in late August and into September her in Wisconsin as well as throughout the Midwest.”

Inspired by @GretaThunberg, students across WI are joining people around the globe to strike for #climate tomorrow. We sat down with @ycatw activist Sophie Guthier to talk about why youth are getting involved on this critical issue. #FridaysforFuture #climatecrisis pic.twitter.com/LRnS8PaZ8U

The National Guard’s Hardwood Range training area will not be open to hunters and hikers this fall.

Captain Joe Trovato says that change is due to recent policy shifts in the Department of Defense. “What the Air Force considers a hazard has greatly expanded over the past decade or so, just due to the types of munitions that they do use.”

Trovato says that’s because of the possible danger that someone will get hurt on the munitions that they drop during training. “It’s a low percentage probability certainly, however keeping with Air Force regulation, we certainly don’t want to expose anyone to any risk, even if it’s remote.”

Trovato says they’re sorry that they can’t allow that access, but that the safety of the general public and citizens is a top priority of the National Guard.

Wisconsin Governor Tony Evers has issued an executive order dealing with a class of concerning chemicals. Evers is using an executive order to address pollution from chemicals in firefighting foam, non-stick cookware, and fast food containers. They’re known as PFAS (per- and polyfluoroalkyl substances.)

Evers wants state environmental and agriculture regulators to work with wastewater treatment plants to identify PFA sources, and develop regulatory standards for them. His administration is proposing a new PFAS enforcement standard of 20 parts per trillion. The Wisconsin Department of Natural Resources is already working to implement that. The federal standard is 70 parts per trillion.

“This is a historic day for Wisconsin, as the Two Creeks solar project takes the next step in the process towards producing clean, sustainable energy for the state of Wisconsin,” Evers said.

Two Creeks is being built near the Point Beach Nuclear Power Plant and developed by a subsidiary of Next Era Energy Resources. Next Era is the world’s largest generator of renewable energy and also owns the Point Beach plant.

“Our company is committed to reducing greenhouse gas emissions, but we must do that while maintaining reliable and cost effective energy for customers. This project is another step along our path to a clean energy future,” said Tom Metcalf, President of Wisconsin Public Service.

Thanks to @GovEvers for helping us kick off construction on Wisconsin’s first large-scale solar facility. We’re proud to partner with @MGEMadison @nexteraenergy on Two Creeks Solar Park. The 150-megawatt project will produce enough clean energy to power more than 33,000 homes. pic.twitter.com/2NZUGIOXbE

Jeff Keebler is President and CEO of MG&E.  “MG&E has set a goal of net zero carbon electricity by 2050, a goal shared by the state of Wisconsin and the governor. Two Creeks Solar is an important step towards achieving that goal. It is a cost effective clean energy, generated right here in Wisconsin,” Keebler said.

The completed project will have a half-million solar panels across 800 acres. The 150 megawatt project will produce enough energy to power more than 33 thousand homes. Construction will ramp up this fall and the project is expected on-line by the end of 2020.