You are here: Home / Archives for Aaron Hill 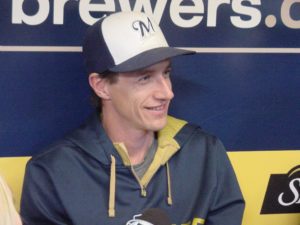 Milwaukee Brewers pitcher Zach Davies has been so good for so long.  Yesterday, Davies struggled, allowing six runs in 4 1/3 innings in a 8-1 loss to the Los Angeles Dodgers at Miller Park.

Davies had gone 5-0 with a 2.64 ERA over his previous 10 starts.  He was 3-0 with a 1.64 ERA in five outings in June.  But Davies surrendered home runs to Trayce Thompson, Yasmani Grandal and Corey Seager.

Overall, Davies allowed eight hits.  The 4 1/3 innings is his shortest start since his first start on April 17. END_OF_DOCUMENT_TOKEN_TO_BE_REPLACED

The Cincinnati Reds jumped out to a quick 3-0 first inning lead, but the Milwaukee Brewers kicked things in gear and rolled to a 9-5 win at Miller Park on Friday night.

The Brewers extended their winning streak to four games, while the Reds dropped their 11th in a row.

Aaron Hill homered twice, giving him five in two games against the Reds this season.  Jonathan Lucroy had a home run and double while driving in three.  Jonathan Villar had three hits and a walk, raising his average to .306.  Villar also scored twice and stole two bases. END_OF_DOCUMENT_TOKEN_TO_BE_REPLACED

Martin Maldonado grounded into a fielder’s choice with Nieuwenhuis being forced out at home.  Villar then followed with a single to left that scored Hill. END_OF_DOCUMENT_TOKEN_TO_BE_REPLACED

The Milwaukee Brewers scored double digit runs for the first time this season, knocking off the Minnesota Twins 10-5 at Miller Park on Wednesday night.

Aaron Hill put the Brewers ahead for good with his first home run of the season to lead off the sixth inning.  Domingo Santana and Chris Carter also went yard.  Carter also doubled and finished with three runs batted in as the Brewers outhit the Twins 13-to-12.

Jimmy Nelson got the win and improved to 3-1, despite giving up home runs to Eddie Rosario and Oswaldo Arcia.  Nelson struck out six Twins in 6 2/3 innings.

Ryan Pressly took the loss in relief for Minnesota, which has lost two straight after winning four in a row.

The Brewers assured themselves of at least a split in their four game, home and home series with Minnesota which wraps up Thursday afternoon at Miller Park. 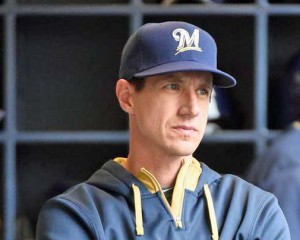 The Milwaukee Brewers avoided a season-opening sweep at the hands of San Francisco, knocking off the Giants 4-3 at Miller Park on Wednesday afternoon.

Chris Carter, who clubbed a solo home run earlier, broke a 3-3 tie in the 7th inning with a sacrifice fly, delivering the game winning run.  His home run came off of Giants starter Jeff Samardzija, to right center.

The Brewers avoided digging a big hole early, thanks to the defense of third baseman Aaron Hill.  In the first inning, Hill raced down the left-field line to haul in Brandon Belt’s pop fly with an over-the-shoulder catch.  Hill then turned and fired a strike to the plate to get Buster Posey tagging from third base. END_OF_DOCUMENT_TOKEN_TO_BE_REPLACED

The Milwaukee Brewers cranked out 14 hits in a 6-1 exhibition victory over the Astros in Houston on Thursday night.

Ryan Braun clubbed his first home run of the spring and catcher Jonathan Lucroy went 3-for-3.  Braun finished with two hits, as did Aaron Hill, Ramon Flores and Chris Carter.

Jimmy Nelson pitched 5 1/3 innings of shutout ball to get the win, allowing just two hits and striking out five.  Nelson will start the second game of the season opening series against the San Francisco Giants.  He saw his spring ERA drop to 1.17 in four starts.

The two teams will play one final exhibition game this afternoon at Minute Maid Park, before the Brewers face their Double-A team in Biloxi, Mississippi on Saturday. 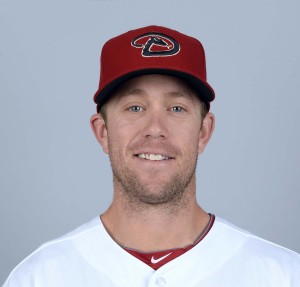 The 33-year-old Hill has spent most of his career as a second baseman.  Over eleven seasons in the majors, Hill has 1,148 starts at second, with 72 starts at third base and 61 starts at shortstop.

Hill came to the Brewers, along with pitcher Chase Anderson and shortstop prospect Isan Diaz in a offseason trade for shortstop Jean Segura and right-hander Tyler Wagner.

Others will get looks at third base as well, including newcomers Will Middlebrooks and Garin Cecchini, but Counsell wants Hill to get a good look first.

The Diamondbacks were looking for a little more offense, despite ranking second in the National League in scoring last season. END_OF_DOCUMENT_TOKEN_TO_BE_REPLACED