You are here: Home / Archives for Max Zimmer

Liam Folkes tallied the game-winner at the 10:50 mark of the first overtime period to earn the 4-3 win for Penn State.

The Badgers got goals from Max Zimmer, Brock Caufield and Josh Ess.

The Badgers won the series opener on Friday night before the Nittany Lions were able to even the series at 1-1 on Saturday, forcing the third and deciding game on Sunday evening.

Freshman goaltender Daniel Lebedeff made a career-high 46 saves in the loss, good for a .920 save percentage.

The Badgers finished the season with a 14-18-5 overall record. 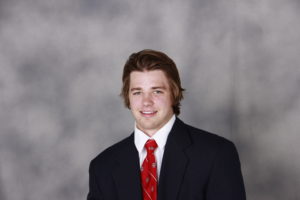 Luke Kunin scored the other goal for the Badgers, just 21 seconds into the game on an assist from Ryan Wagner.

Jack Berry saved 17 of the 19 shots he faced on the night to earn his second win in as many starts.

The Badgers outshot Merrimack 36-19.  The Badgers will play for the sweep over the Warriors when the two teams close out their series at the Kohl Center 7 p.m.