You are here: Home / Archives for Eric Bledsoe

They’re not always going to be perfect and Wednesday night’s game against Golden State in San Francisco is a perfect example of that.  But when the dust settled, the Milwaukee Bucks pulled out a 107-98 win over the Warriors.

Giannis Antetokounmpo scored 30 points and pulled down 13 rebounds to lead the Bucks.  Khris Middleton added 21 points, seven rebounds and six assists as Milwaukee improved to an NBA best 33-6 on the season and 15-4 on the road.

Just like in the Bucks loss at San Antonio on Monday, the Warriors packed the paint and invited the Bucks to fire away from three-point range.  The Bucks hit just 9-of-41 from distance (22%), their second-worst game of the season.

Antetokounmpo is just 1 for 12 from three-point range in the first two games of the road trip.  Middleton is 4 for 15.  Donte DiVincenzo is 2 of 11 and Eric Bledsoe just 2 of 8.

The Bucks rely on three-point shooting for their success, so they’re hoping the recent slump is short-lived.

Alec Burks led the Warriors with 19 points off the bench.  Glenn Robinson the Third and Damion Lee added 15 points apiece in the loss.  Golden State has now lost six straight to fall to 9-30.

The Bucks play the third game of their four-game road trip at Sacramento on Friday night.

The Milwaukee Bucks didn’t play well or shoot well in the first half and went into the locker room at halftime with a narrow three-point lead over the Chicago Bulls.

The second half was different.  The Bucks busted out in the third quarter, hitting 71.4% from the field and built a 16 point lead, on the way to a
123-102 win over the Bulls at the United Center.

Khris Middleton scored a game high 25 points and Giannis Antetokounmpo returned after missing two games with back soreness to score 23 points and pull down 10 rebounds in the win.

Eric Bledsoe also returned to the Bucks lineup after missing eight games due to an avulsion fracture to his right fibula.  He was on a minutes restriction and finished with 15 points in 16 minutes.

Ersan Ilyasova had 14 points and 11 rebounds, his third straight double-double and Robin Lopez added 11 points against his former team.

The Bucks improved to an NBA best 30-5 and will host the Minnesota Timberwolves on Wednesday night at Fiserv Forum. 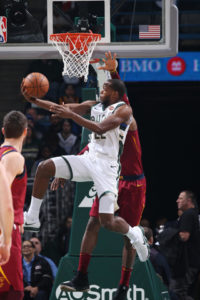 Already playing without Eric Bledsoe, the Milwaukee Bucks went without star forward Giannis Antetokounmpo on Friday night in Atlanta and still rolled to a 112-86 win over the Hawks.

Khris Middleton scored a team-high 23 points for the Bucks.  Brook Lopez added 19 points and Ersan Ilyasova added 18 points and 17 rebounds in the win.

The Bucks had control of the game throughout and it meant no player logged more than 26 minutes.  It means they should be well rested for the back end of a double-header against Orlando in Milwaukee on Saturday night at Fiserv Forum.

Middleton really heated up in the second quarter, scoring 13 points on 5-for-6 shooting. END_OF_DOCUMENT_TOKEN_TO_BE_REPLACED

The Milwaukee Bucks extended their winning streak to 16-straight games, knocking off the New Orleans Pelicans 127-112 at Fiserv Forum on Wednesday night.

The Bucks played without star Giannis Antetokounmpo, who was sidelined with a sore quad.  They didn’t need him.

Eric Bledsoe scored a team-high 29 points and Khris Middleton added 24 for the Bucks.

J.J. Redick had a game-high 31 points for New Orleans.  Brandon Ingram added a double-double with 25 points and 10 rebounds.  The Panthers fell to 6-19 with their 10th straight loss.

The Bucks are back in action on Friday night, in Memphis against the Grizzlies.

The Milwaukee Bucks ran their winning streak to nine games on Wednesday night, knocking off the Atlanta Hawks 111-102 at Fiserv Forum.

Giannis Antetokounmpo had 30 points and 10 rebounds as the Bucks improved to 15-3.  Eric Bledsoe added nine points and 10 assists.

Khris Middleton returned the Bucks lineup, coming off the bench to score 16 points.

The Bucks return to action on Friday night, facing the Cavaliers in Cleveland.

Giannis Antetokounmpo posted a triple-double with 24 points, 19 rebounds and 15 assists as the Milwaukee Bucks knocked off the Portland Trailblazers 137-129 on Thursday night at Fiserv Forum.

Eric Bledsoe scored 30 points and Pat Connaughton added 18 off the bench to lead the Bucks (12-3) to their sixth straight victory.

C.J. McCollum led the way with 37 points and 10 assists for Portland, which has dropped three in-a-row.  The Trailblazers were playing shorthanded, without star guard Damian Lillard (back spasms) and big men Zach Collins (shoulder) and Hassan Whiteside (hip).

The win over Portland started a stretch where the Bucks will play 12 of their next 15 games at home. 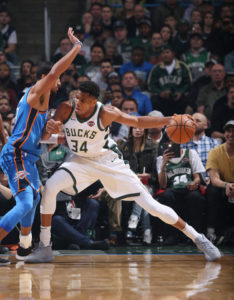 Giannis Antetokounmpo had another dominant performance as the Milwaukee Bucks outlasted the Chicago Bulls 124-115 on Thursday night at Fiserv Forum.

Antetokounmpo poured in 38 points and pulled down 16 rebounds as the Bucks started to take control in the third quarter.  Eric Bledsoe added 31 points and eight assists for Milwaukee, which has won six-of-seven to improve to 8-3.

The Bucks played their first game without Khris Middleton, who is sidelined with a left knee contusion.  Second-year guard Donte DiVincenzo got the start in Middleton’s place.

The Bulls took a 66-65 lead into the locker room at halftime, thanks in part to their 11 for 24 shooting from three-point range.  Bulls guard Coby White led the charge with 19 points in the first half and 26 for the game.

The Bucks meanwhile missed their first 7 three-point attempts of the third quarter and made just 6 of 33 (18.2%) for the game from distance.

Antetokounmpo scored 30 or more points in his sixth straight game, matching the franchise record set by Marques Johnson in 1978.

Next up for the Bucks is a three-game road trip, starting at Indiana on Saturday night.

Giannis Antetokounmpo had 35 points and 16 rebounds as the Milwaukee Bucks wrapped up their four-game road trip with a 121-119 win over the Thunder in Oklahoma City on Sunday night.

Eric Bledsoe added 25 points, including two crucial free throws in the last four seconds as the Bucks have won five of their last six games and finished their trip out west with a 3-1 record.

The Bucks win came at a cost, though.  Khris Middleton left the game with a leg injury and did not return.

Dennis Schroder led the Thunder off the bench with 25 points and Shai Gilgeous-Alexander added 22.  Chris Paul hit a three with less than a second left for the final margin.

Oklahoma City has lost two of its last three games.

The Bucks get a few days off now.  They return to Fiserv Forum on Thursday night to face the Chicago Bulls.

The Milwaukee Bucks opened a four-game road trip with a convincing 134-106 win over the Minnesota Timberwolves at Target Center in Minneapolis on Monday night.

Giannis Antetokounmpo had 34 points and 15 rebounds to lead the Bucks, posting a double-double in all seven games this season.

Khris Middleton added 26 points and Eric Bledsoe had 22 as the Bucks (5-2) won their third straight game.

Andrew Wiggins scored 25 points to pace the Timberwolves (2-3).  They played without Karl-Anthony Towns who sat out while serving a two-game suspension for a fight with Philadelphia’s Joel Embiid last week.

The game was delayed almost an hour at the start because of a crooked rim.  The baskets needed to be swapped out and the game, which was set to start at 7 p.m., didn’t tip off until 7:59 p.m.

Bucks forward Giannis Antetokounmpo has been named the Eastern Conference Player of the Week for games played from Oct. 28-Nov. 3. END_OF_DOCUMENT_TOKEN_TO_BE_REPLACED