You are here: Home / Archives for Purdue Boilermakers

With the Badgers up 61-59 late, Sasha Stefanovic had two 3-point attempts with less than a minute left END_OF_DOCUMENT_TOKEN_TO_BE_REPLACED

The 14th ranked Wisconsin Badgers had a hard time shaking the Purdue Boilermakers early, but pulled away for a 45-24 win at Camp Randall Stadium on Saturday.

The win allows the Badgers (9-2, 6-2 Big Ten) an opportunity to play border rival Minnesota (10-1, 7-1) for the Big Ten West Division title and the right to face Ohio State for the Big Ten Championship.

Saturday’s match-up at TCF Bank Stadium in Minneapolis will be the 129th meeting in the long rivalry with Paul Bunyan’s axe on the line.  The Badgers lost the axe last season in a 37-15 loss to the Gophers at Camp Randall.  It ended a streak of 14-straight Badger wins in the series.

The Badgers extended their win streak to 14 games with the victory.  Running back Jonathan Taylor rushed 28 times for 222 yards and a touchdown.  Taylor topped 200 yards for the 12th time in his career.

Quarterback Jack Coan completed 15 of 19 for 203 yards, one touchdown and one interception. END_OF_DOCUMENT_TOKEN_TO_BE_REPLACED

The Wisconsin Badgers will be without their starting left tackle, Cole Van Lanen on Saturday against the Purdue Boilermakers.  The redshirt junior suffered a head injury during practice this week and won’t be available.

Van Lanen, who has started all 10 games this season, will be replaced by redshirt sophomore Tyler Beach.  Beach has one start under his belt at right tackle in UW’s loss at Illinois..

Thirteen seniors will play their final game at Camp Randall Stadium on Saturday, including linebackers Chris Orr and Zach Baun.

Orr leads the Badgers with 10 sacks, while Baun has registered nine and a half, leading the Badgers to a total of 37 sacks for the season.  That total ranks fifth nationally.

The Badgers have recorded six games with at least four sacks this season.  Only Ohio State (8) has more among FBS schools.

The Marquette Golden Eagles trailed by as many as 18 points in the first half and looked like they were headed towards their first loss of the season.  But the Golden Eagles started to hit some shots and played some lock-down defense to come from behind to beat the Purdue Boilermakers 65-55 in a Gavitt Tipoff game Wednesday night at Fiserv Forum.

The Golden Eagles improved to 1-3 in the annual competition between the Big East and Big Ten Conferences.

Junior guard Koby McEwen, who transferred from Utah State, led the second half charge, scoring 18 of his game-high 23 points after halftime.

Wisconsin (17-7, 9-4) struggled down the stretch, going more than five minutes without a point as the Spartans put the game away. END_OF_DOCUMENT_TOKEN_TO_BE_REPLACED

When the final horn went off, many of the excited fans flooded the court to celebrate with their team. END_OF_DOCUMENT_TOKEN_TO_BE_REPLACED

The Wisconsin Badgers went down by double digits in the first three minutes of last night’s Big Ten matchup in West Lafayette and never mounted any kind of challenge.  The Badgers fell to 3rd ranked Purdue 78-50.

Ethan Happ had 15 points, seven assists and six rebounds to lead the Badgers (9-10, 2-4), who have now lost three straight.  But Happ also tied teammate Brad Davison with seven turnovers each.  The Badgers finished with a season high 20 turnovers as a team.

The Badgers are now 0-5 against ranked opponents this season.  They’ll return home to host Illinois on Friday night.  It’ll be their first home game since January 2.  Illinois is winless in the Big Ten after losing on a last second three-point shot against Nebraska on Monday night. 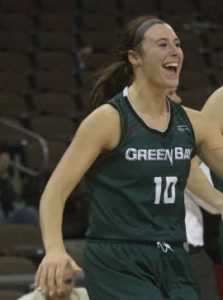 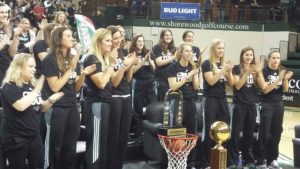 Green Bay is making its 17th appearance in the NCAA Tournament, going 6-16 all time in tournament play.  It is the sixth time they have earned a single digit seed and the second time in the last three years. END_OF_DOCUMENT_TOKEN_TO_BE_REPLACED