You are here: Home / Archives for Brewers

Brandon Woodruff went seven strong innings and drove in the game’s lone run prior to the seventh inning in the Milwaukee Brewers 3-2 victory over the Arizona Diamondbacks in Phoenix Wednesday afternoon.

Woodruff allowed one run on three hits with nine strikeouts.

The win ended a period of sixteen straight games for Milwaukee, who open a homestand Friday against the Colorado Rockies.  It will be the first homestand featuring a full capacity crowd at American Family Field.

Jace Peterson and Tyrone Taylor were both 2-3 at the plate.  Josh Hader struckout two in the ninth for his 19th save.

The American League defeated the National League 8-6 in Tuesday nights All Star game in Washington DC.

The Brewers had five representatives.  Christian Yelich went 1 for 3 with a homerun.  Jesus Aguilar and Lorenzo Cain went 0-2 and Jeremy Jeffress pitched a scoreless inning.  Josh Hader allowed a 3-run homerun to former Brewer Jean Segura in the eighth inning that gave the A.L. a 5-2 lead.

After the game, Hader spoke to reporters regarding racist and homophobic tweets sent out on his account when he was 17 years old (seven years ago).  Hader apologized, saying ‘No excuses. I was dumb and stupid.”

The Brewers resume play on Friday night against the Los Angeles Dodgers at Miller Park.  Milwaukee has lost six in a row and trail the Chicago Cubs in the N.L. Central by 2 1/2 games.

Brent Suter allowed just two hits and two runs over seven innings as the Brewers drubbed the Cardinals 11-3 in Milwaukee.  Eric Thames contributed a bases-clearing triple and Manny Pina homered for Milwaukee.  The Brewers lead the Cubs by one game in the NL Central at 44-and-30, after the Cubs lost to the Cincinnati Reds Thursday night.  Carlos Martinez was the losing pitcher, giving up seven runs in four innings.  Matt Carpenter led off the game with a first-pitch home run for St. Louis, his fourth in the last five games.  This was the second consecutive start where Suter has gone seven innings, and is now 8-4 on the season.

The Cardinals are 2-and-7 in their last nine. The second game of the series is Friday at Miller Park.  Junior Guerra throws against Jack Flaherty.

The Brewers lead in the National League Central grew to 4.5 games Monday after an 8-3 in the series opener against the St. Louis Cardinals.

Milwaukee jumped out to a 4-0 lead through four innings, only to see the Cardinals pull to within a run thanks to a 3 run fifth.  The lead was 5-3 in the bottom of the seventh when Jonathon Villar’s 3-run homerun opened the game up at 8-3.

Ryan Braun, dropped to fifth in the batting order, went 3-for-3, and Christian Yelich was 2-for-4 to raise his average to .310.  Brent Suter (5-3) allowed three runs in five innings, with six strikeouts to earn the victory.  The bullpen was stellar again, as Taylor Williams, Matt Albers and Jacob Barnes combined for four shutout innings and just one hit allowed.

Game two of the three game series is Tuesday, with Zach Davies throwing against Michael Wacha.

Brewers starter Wily Peralta went 6 1/3 innings of one-run ball, notching the win in a 3-1 Brewers victory over the Mets in New York on Wednesday night.

Peralta, who has been erratic at times this season, made his best start  in nearly a month, limiting New York to four hits and one walk to set up a rubber game on Thursday night at 6:10 – the Brewers final road game o this trip.

After allowing three of the first five batters he faced to reach base, Peralta calmed down and retired  16 of his final 18 hitters, before manager Ron Roenicke went to the bullpen.

Scooter Gennett opened up the scoring for Milwaukee when he doubled to lead off the third and came around on Jonathan Lucroy’s RBI groundout. An inning later, Jean Segura knocked in Aramis Ramirez with a single to left, and finally in the fifth, Carlos Gomez‘s grounder to second base turned into an RBI single when Mets pitcher Jacob deGrom didn’t cover first base, scoring Ryan Braun.

Lucroy finished 3-for-5 with an RBI and two doubles, and is batting .444 in June.

The third round of National League All-Star voting was updated and Milwaukee Brewers OF Carlos Gomez jumped from 5th to 3rd in fan voting. The current update has 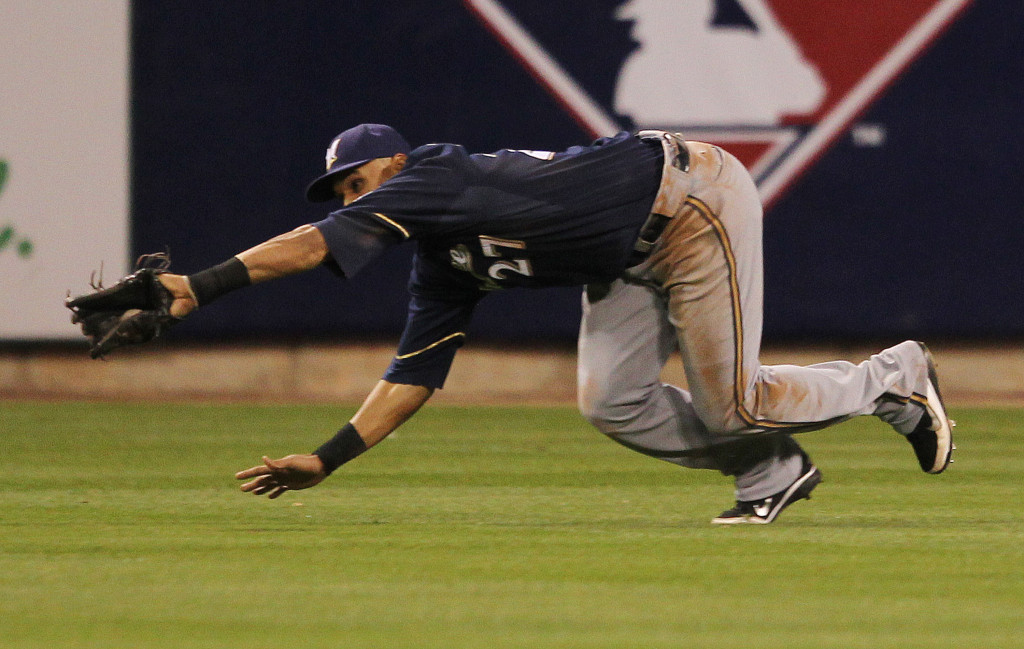 Gomez by the numbers:

If Gomez is voted by fans into the top three he would become just the 4th Brewer to earn a starting position in the All-star game under the current fan selection process.