You are here: Home / Archives for Eric Sogard Orlando Arcia optioned to the minors – Photo by Bill Greenblatt/UPI

The Milwaukee Brewers made a series of roster moves today.  The biggest of which came when they sent shortstop Orlando Arcia to Triple-A Colorado Springs.

Arcia has been mired in a season-long offensive slump, hitting .194 with two home runs and 13 RBI.  In 139 at bats, Arcia has 34 strikeouts and only seven walks.

The Brewers also made a trade, acquiring minor league catcher Erik Kratz from the New York Yankees for a player to be named or cash.  Kratz was hitting .269 in 17 games with AAA Scranton/Wilkes-Barre.  He had four home runs and six RBI.

To make room for Kratz, the Brewers designated catcher Jett Bandy for assignment.

Brent Suter tossed 4 2/3 innings of two-run ball after coming in for injured starter Wade Miley, leading the Milwaukee Brewers to a 3-2 win over the Cleveland Indians on Tuesday night at Miller Park.

Kluber (5-2) allowed three runs on five hits over six innings.  He also served up a two-run homer to Travis Shaw and has now allowed eight homers over his last four games.

Suter entered the game with one out in the first after Wade Miley suffered a strained right oblique.  He allowed five hits, including a pair of solo home runs to Jose Ramirez and Francisco Lindor, striking out five.  He helped hand the Indians their fourth straight loss. END_OF_DOCUMENT_TOKEN_TO_BE_REPLACED

Besides the run production itself, the Brewers are 14-1 against Miami, Cincinnati, San Diego and Kansas City.  They are averaging 5.5 runs per game.  In their 20 games against winning teams, Chicago, St. Louis, New York and Pittsburgh, the Brewers are 6-14 and have averaged just 2.5 runs a game. END_OF_DOCUMENT_TOKEN_TO_BE_REPLACED

Shortstop Orlando Arcia singled to right against a five-man infield to lift the Milwaukee Brewers to a 5-4 win over the Chicago Cubs on Friday night at Miller Park.

The Brewers have now won four games in their final at-bat this season.

Travis Shaw, who homered for the first time this season in the Brewers four-run fifth inning, said the ninth inning is their inning.

Brandon Woodruff made it through just 3 2/3 innings because of a high pitch count, so the Brewers bullpen was again called on for extra duty and they came through.  Josh Hader, Jeremy Jeffress and Matt Albers took it the rest of the way to preserve the Brewers victory.

The Brewers ended their scoreless inning streak which had reached 22 innings. END_OF_DOCUMENT_TOKEN_TO_BE_REPLACED

The Milwaukee Brewers improved to 5-1 in the Cactus League on Tuesday, knocking off the Cincinnati Reds 6-3 at Maryvale Baseball Park.

Chase Anderson got the start and pitched two innings, allowing one hit and striking out one.  Of the 19 pitches he threw, 18 were strikes.

Zach Davies will make his first appearance of the spring today when the Brewers face the San Francisco Giants.

Brewers slugger Ryan Braun has played outfield but will make his first start at first base today.

AUDIO: Ryan Braun says it’s too early to tell how this will play out :19

The Brewers went with a heavy left-handed hitting lineup against Pirates starter Ivan Nova.  Jonathan Villar, who is a switch hitter, started in center field.  Eric Sogard also started at shortstop after Orlando Arcia was a late scratch with back spasms.  END_OF_DOCUMENT_TOKEN_TO_BE_REPLACED

The Brewers have struggled to score runs in the first two games of the series, going 3 for 16 with runners in scoring position with 19 runners left on base.  Frustrations reached a peak when Travis Shaw was called out on strikes on a pitch that was off the plate.  He slammed his bat to the ground and was immediately ejected by the home plate umpire.  It didn’t take long for manager Craig Counsell to join Shaw in the clubhouse when he two came out and let the umpire know what he was thinking. END_OF_DOCUMENT_TOKEN_TO_BE_REPLACED 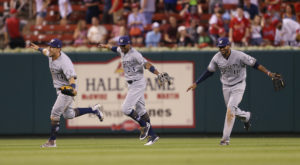 The Brewers bullpen did the job, throwing four hitless and scoreless innings.  With Corey Knebel off limits, Oliver Drake pitched the ninth, striking out a pair and collecting his first save of the season.  END_OF_DOCUMENT_TOKEN_TO_BE_REPLACED