You are here: Home / Archives for Josh Lindblom 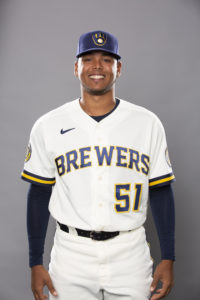 The Milwaukee Brewers have reached agreement on a five-year contract extension with pitcher Freddy Peralta that guarantees him $15.5 million with team options for 2025 and 2026 that could take the deal to $30 million.

The deal was first reported by Ken Rosenthal of the Athletic and Jon Heyman of MLB Network.

The 23-year-old Peralta came to spring training with a slider added to his pitch repertoire.

The five-year deal would reportedly buy out all three of Peralta’s arbitration years.  The club options, if the Brewers choose to exercise them, would buy out the first two years of free agency.

The two sides agreed to a three-year deal, guaranteeing $9.125 million to the 32-year-old Lindblom.  He pitched the last five seasons in the KBO.

Lindblom was used primarily as a reliever in the Major Leagues, but he switched to a starter in Korea.  Lindblom went 20-3 with a 2.50 ERA in 30 starts last season.  Londblom was named the most valuable player in the league for his performance.

The Brewers are looking for starting pitching help after losing Jordan Lyles and Gio Gonzalez to free agency and the trades of Zach Davies and Chase Anderson.

Lindblom was a second-round draft pick of the Los Angeles Dodgers out of Purdue in 2008 and spent time in the majors with the Dodgers, Phillies, Rangers, A’s and Pirates.